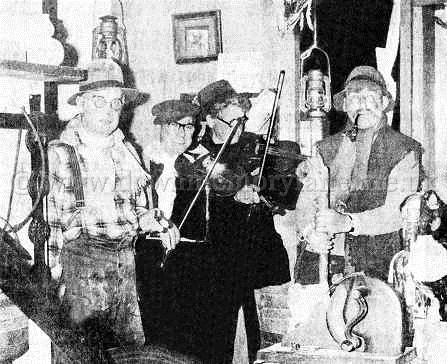 FARMHOUSE SUPPER 1291
Randalstown OC Presbyterian Church had a farmhouse supper in 1968.
This is the scene that greeted the guests but whether Joe Hill, Jim Fletcher, George Spence and James Drummond played the instruments is unknown. 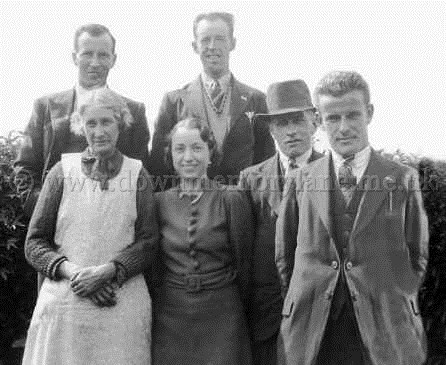 FAMILY GATHERING 1198
It's the 1930's and in this group photo at the back in Unknown and William Millar.
Then we have Granny Jean Millar and her famous white pinny, Unknown, Unknown and James Millar. The unknowns are believed to be relatives visiting. 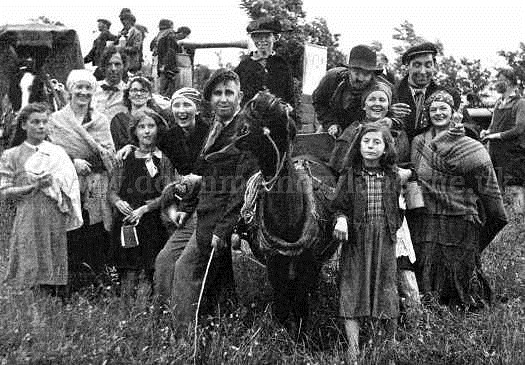 FANCY DRESS PARADE 1396
At this fancy dress parade at Randalstown in 1946 the donkey (which is the middle) knows who is the best one there!
After the Second World War this became an annual event throughout villages and towns in the North. Some of the people I have spoken to would love to see it started up again and it was always great fun. They also raised money for different causes and one time they purchased a car for the local district nurse which had been organised by Miss Florence Walker, Jack Purce and the Rev.William Hanna. This bunch of happy people in the parade were known as Tom McVeigh and his merry band of "Gypsies". On the left is May Saunders, Ena Houston, Edna Quigley, Eva McFadden, Billy Porter next to the donkey, then Eileen Quigley, Margaret Small, Rebecca Hume, Jack Hill and Bailie Fleming. 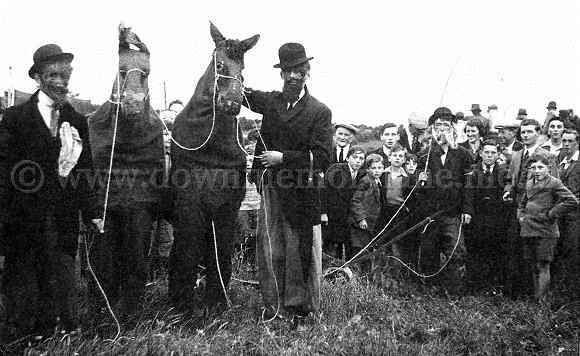 FANCY DRESS PARADE 1397
I don't fancy these two horses pulling this plough but they went on to win First prize as 'Misery Farm in the 'Most Amusing' section in June 1948.
Leading the horses we have on the left Noel Millar and on the right Warren Clarke. The horses were William McFadden and Alex Hall. Then James Millar and Wesley Peoples, guiding the plough was Norman Graham. Apparently when turning the New Street corner one of the horses stopped for a call of nature by pouring out a bottle of water much to the amusement of the spectators. 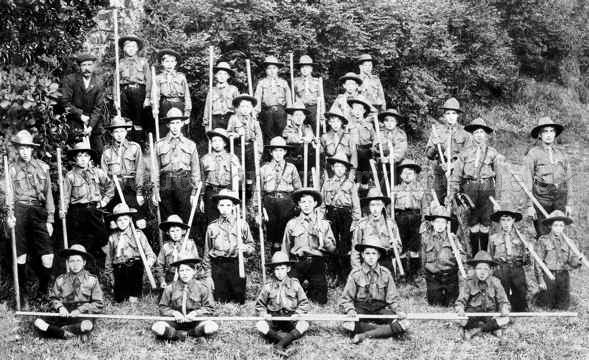 FIRST RANDALSTOWN SCOUTS 1858
These scouts in Shane's Castle grounds 1912 belonged to First Randalstown Scouts. They have the fame of being one of the earliest scout troops in Ireland for they were founded in 1910 just two years after Lord Baden-Powell formed the scout movement. The staves the boys are displaying were used for many purposes in making stretchers, surveying, building bridges and when the scout master wasn't watching playing Robin Hood adventures. Sadly none of the boys in the photograph have been identified as of yet. 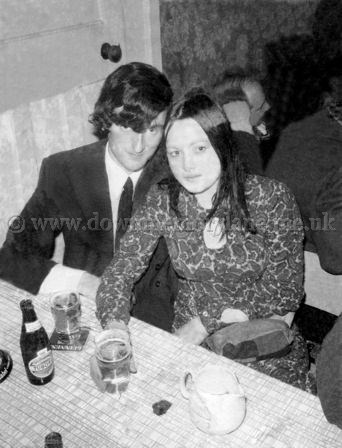 FIVE CORNERS 1973
Here we have Philip Johnston with his girl friend Moreen McNally back into 1973.
They were having a quiet drink together at the Five Corners which back then was just a house with a room turned into a pub. 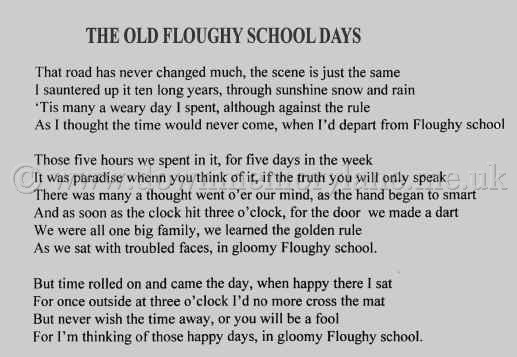 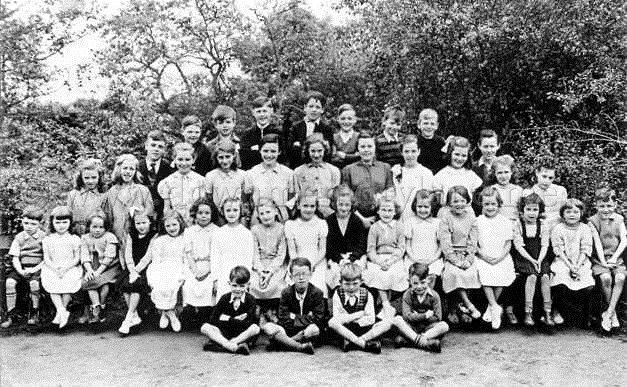 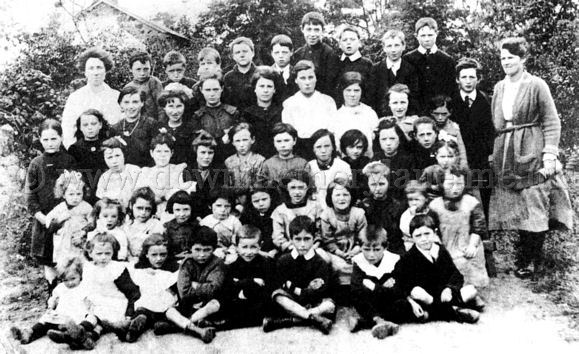 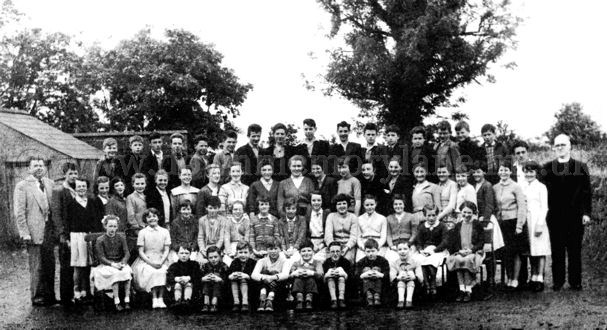 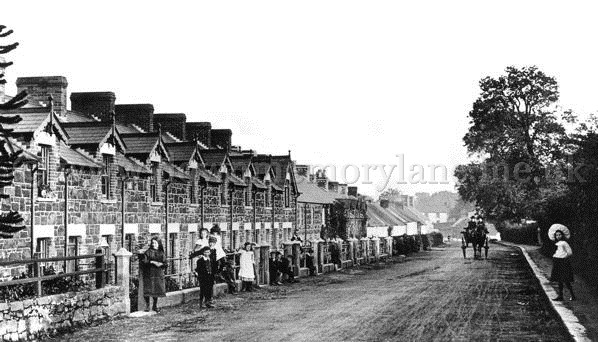 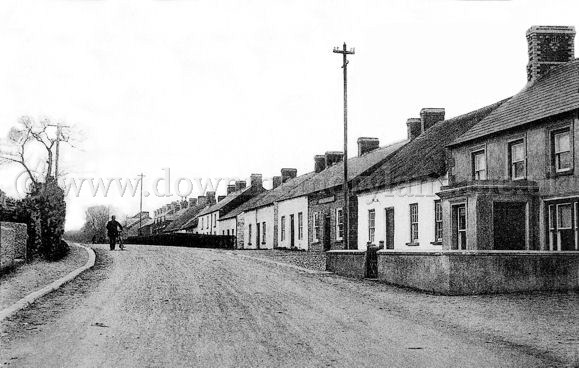 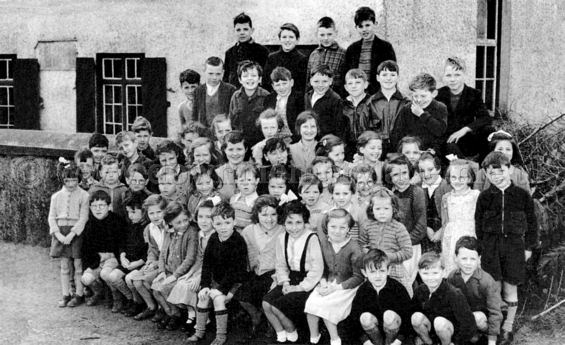 FEEHOGUE 1557
This is Feehogue at Randalstown in 1905, and as you can see at the end of the row thatched cottages are still in demand..
On the road is a horse and cart with two ladies in it and by the tracks on the road no motor cars as yet.
FEEHOGUE 1670
This is Feehogue at Randalstown in 1923.
The tall poles are carrying electric to the houses for lighting which was powered by the Old Bleach Linen company's hyro-electric plant on the River Main.The house with the sign above the door is McKay's sweet shop a favourite for all the kids.
The large imposing building on the right was the barrack of the Royal Irish Constabulary. The place looks deserted, perhaps it's the middle of the day, with people working and children at school. Or could it be the policeman walking up the road with his bike.
FANCY DRESS PARADE 1620
This is the early 1930's and back then in Randalstown they used to have annual fancy dress parades. Now these Randalstown ladies decided to go as nurses from the left Meg Coulson, Mrs.McClure, Mary Dunlop, Rosemary McFadden, Lila McKittrick, Rosemary Hill, Peggy McVeigh and Florence Walker.
Strangely enough although it was not a really warm day a lot of men got very hot under the collar!
1259 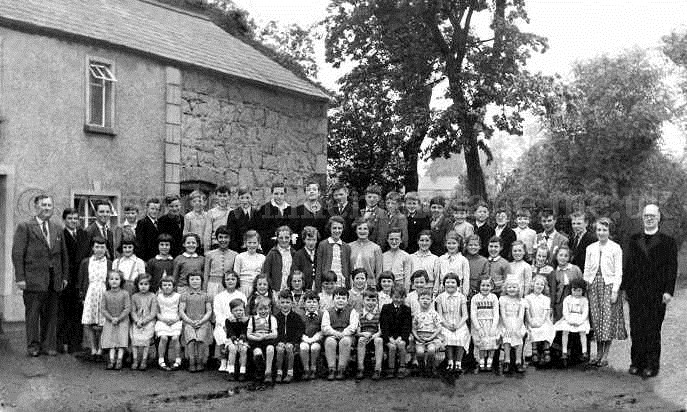 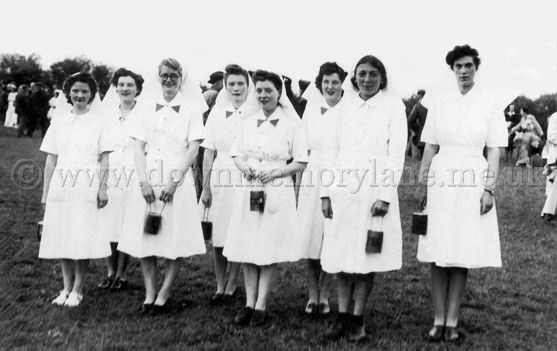 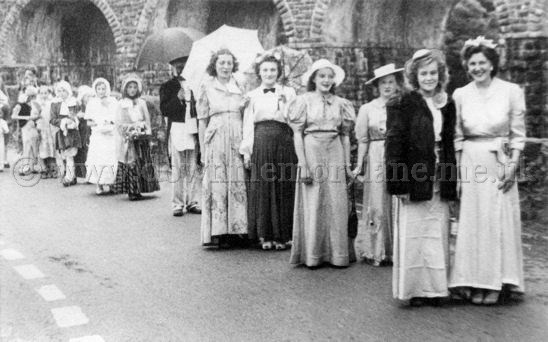 FANCY DRESS PARADE 1711
It's 1948, Randalstown, and standing at the arches is the fancy dress contestants ready to parade through the town. The only person known at the moment is at the front on the left and that is Mary McDowell. Now a surprise lay in store for Mary for the organizers had
decided not only to pick a winner for the fancy dress but also to pick a girl to be Miss Randalstown. When the judges who were Miss Portrush and Miss Portstewart decided there could be only one girl lovely enough to be Miss Randalstown, they picked Mary and she's still a winner today. 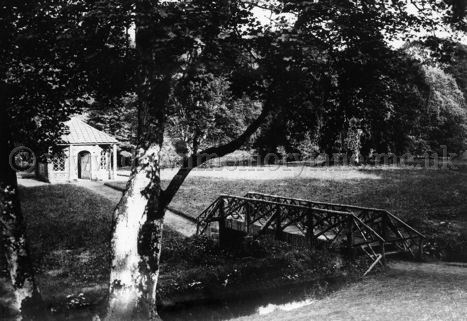 FOG HOUSE 1585
Nestled in the woods of Shane's Castle is this lovely little summerhouse which was called the Fog House for reasons unknown.