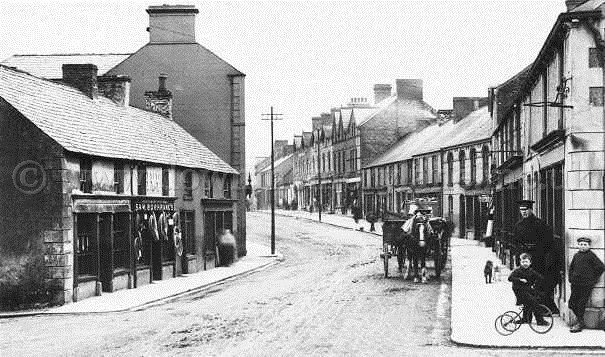 MAIN STREET 740
Main Street in Ballyclare in 1901. To the left the thatched cottage has a sign with the name Rustin Craig on it, and was known as the 'Thatch' a pub. I wonder are the two boys with the pail got milk in it to take home. 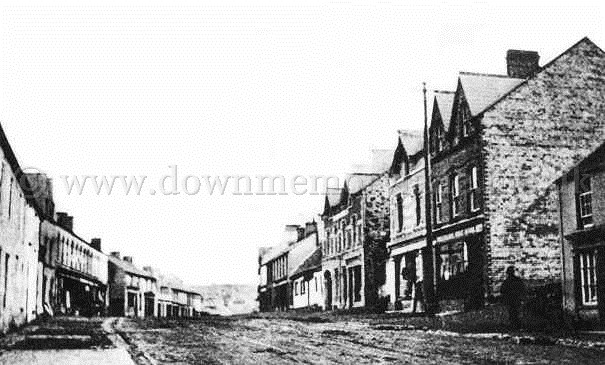 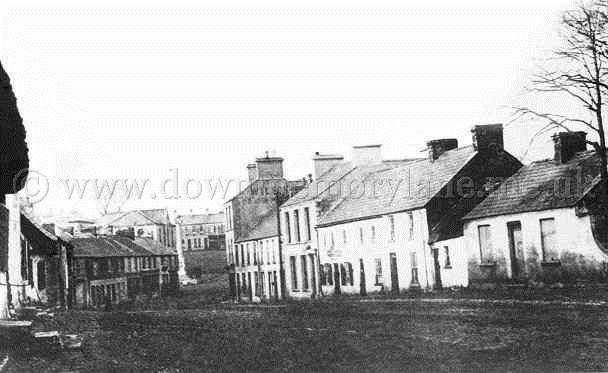 MAIN STREET 742
This is main street in the 1880's, the building on the far right is the Session House of the Unitarian Church in which, by tradition, a school was once held. At this time the Church Bell was attached to this residence. Look at the thatched cottage with one window jammed in between the two houses. In the distance is Market Square and the Town Hall. 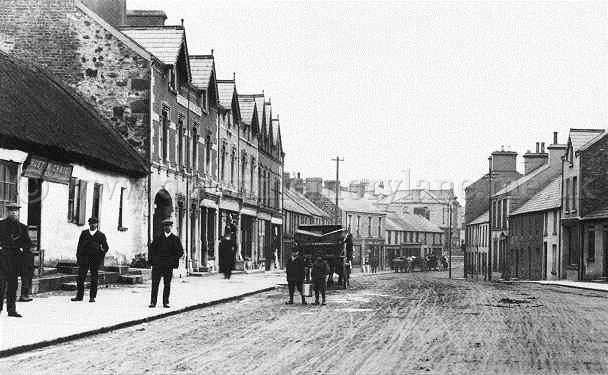 MAIN STREET 741
This view is looking south along Main Street, Ballclare in 1884.
MAIN STREET 745
Main Street, Ballyclare 1906 and on the left we have the IVY shop owned by Sam Cochrane
who bought, sold and repaired bicycles. Perhaps the lad on the right got his tricycle there, as
least he's behaving himself with a policeman standing behind him.
McILROY'S 2718
This is Archibald McIlroy's shop in Ballyclare and he was also an author.
There was not a thing you couldn't get in this shop from hardware to groceries. Also for the tourists there were postcards and trinkets and you could leave your horse and cart next door. 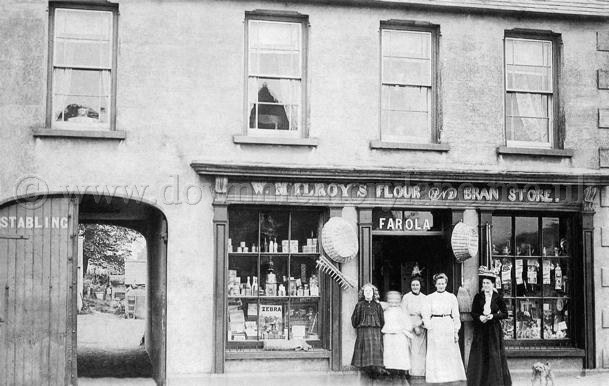 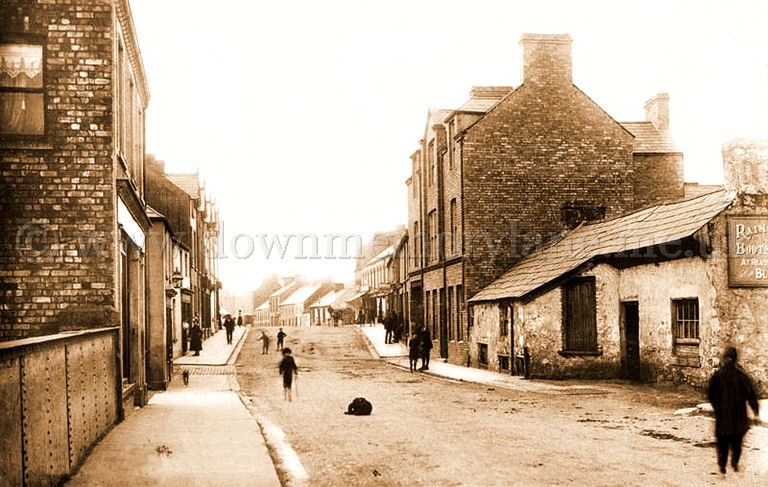 BALLYCLARE MAIN STREET 2575
This is the start of Main Street and the photographer taking it was standing on the railway bridge which operated the old narrow gauge line. The public is now there but if you can get into the council yard you can still the railway arches below the loo block.
Now it was mid-morning then back in 1905 and the only traffic is a baker's van at the brow of the hill. On the other side is a horse and cart, perhaps the owner has popped into the thatched building behind the cart for is was a pub aptly named the "Thatch"! The state of the road tells you that the main traffic was horses, so the children can play happily on the road and even a dog relaxes in the road.
Index: 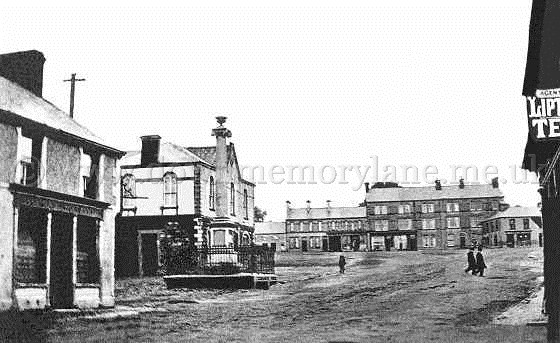 MARKET SQUARE 744
Looking towards Market Square, Ballyclare in 1898.
The road is just a muck road and the shop to the right is an agent for Lipton's Tea. 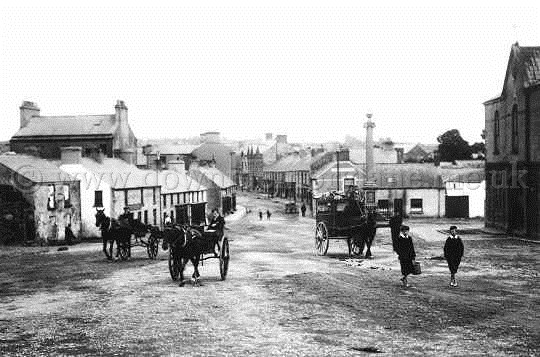 MARKET SQUARE 739
Market Square, Ballyclare 1906. The two boys on the right although being well dressed are in their bare feet, back then shoes were very expensive, equal to a man's weekly wage. So what happened was that when they got home from school the shoes were taken off to save wear and so last longer. Behind them you have the bread man with his horse and cart delivering Englis bread.
The cart in the middle is called a trap and to the left is a jaunting car. 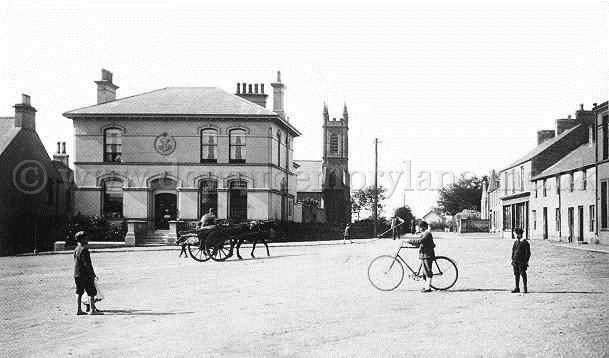 MARKET SQUARE 743
This view of the Market square along the Doagh Road was taken in 1908.
The boy on the left with the little girl is in his bare feet, while the two boys one with the bicycle are smartly dressed with shoes. The horse and cart with the man driving it, is delivering pig carcasses no worry about your health back then.
Further on is a man brushing the street and behind the small wall at the end of the street is load of hay. 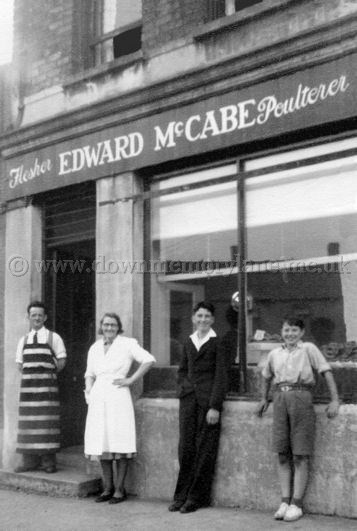 McCABES 1776
Before moving to Castle street in Antrim here standing outside their butcher's shop at Ballyclare in 1953 we have in the doorway Sammy McCabe,
his wife Elizabeth and their two sons Jim and Robin McCabe. 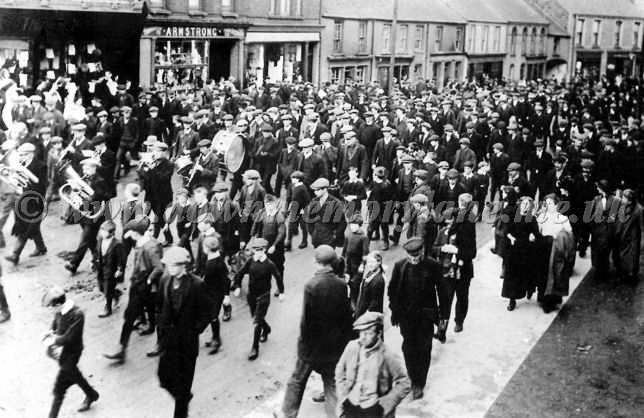 OFF TO WAR 3204
Here marching up Main Street in Ballyclare behind the band during the First World, these men are enlisting to go and fight. The main difference between the men here and the men in England, Scotland and Wales is that there was no conscription here and so all these brave men volunteered and it was the same in WWII.
You want to know the name of the band? I thought you would all know by now that there was only one band that was known throughout the land.
The MASSEREENE BRASS AND REED BAND of course.
In the background is the shop sign for Armstrong - there was a publican (he was also a farmer) named Armstrong in the 1911 census, at 13 Church Street.