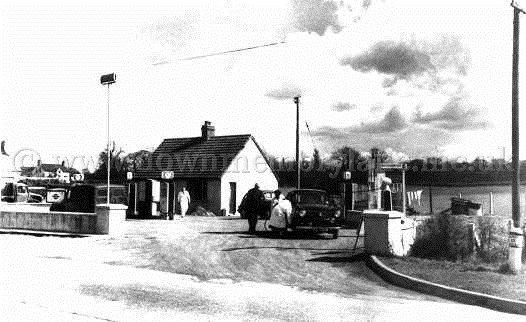 TWELFTH MILESTONE PETROL STATION 762
The Twelfth Milestone Petrol Station at Templepatrick, the year is unknown.
How it got its name? look to the right of the picture and you will see a milestone which says Belfast 12 miles.
The car that is getting the air put into its tyres looks like a Morris with the registration PZ 7346.

THE TEMPLETOWN ARMS 763
Here we have the Templeton Arms in Templepatrick back in 1930. The building has gone through many changes through the years - most notably the 'Pig 'n' Chicken' and, more recently, the Templeton Hotel. The presence of the wonderful vintage car in the foreground, and another coming in the distance, underlined the growing importance of motorised transport during the 1930's. Incidentally, the man standing with his arms folded is John Young. 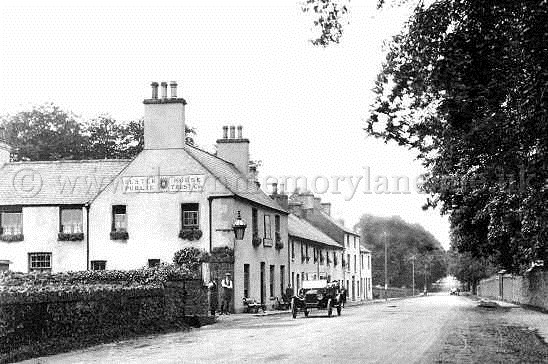 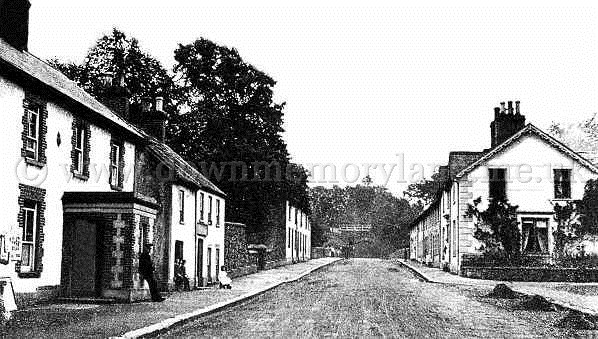 TEMPLEPATRICK VILLAGE 759
Here we have Templepatrick Village in 1914.
On the left is the police station and leaning against it is a member of the Royal Irish Constabulary.
Further up three boys are sitting on a windowsill and the building behind the little girl sitting on the stool is the Post Office.The road sweeper has been when looking at the piles of dirt on the right. 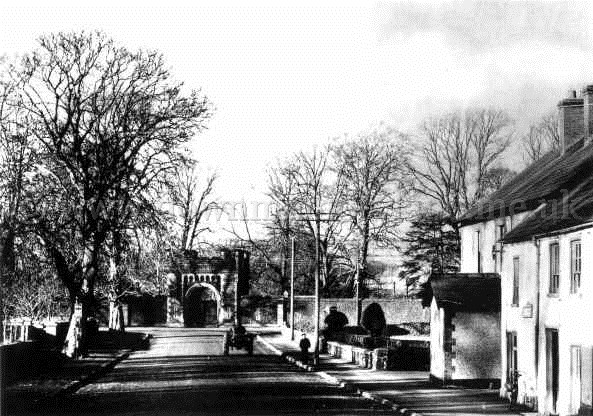 TEMPLEPATRICK VILLAGE 761
This serene shot of Templepatrick village was taken in the 1930's, and the notable absence of cars is a nice reminder of a more sedate age. The second building on the right is the police station, nestled beside the Post Office. If you look closely at the picture you might just make out the shape of a bike propped up outside. I've learned that it was used by the Telegram Boy Bobby McCullough who, as luck would have it, is actually pictured in the centre. Trundling down the street towards the main Antrim to Belfast Road on the tractor is John Gourley. 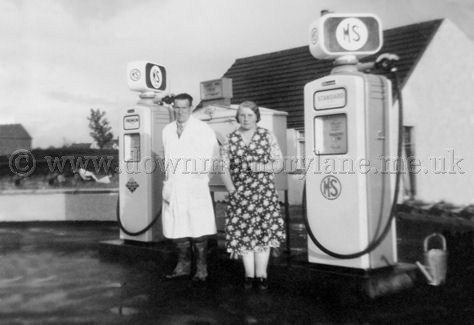 TWELFTH MILESTONE PETROL STATION 2097
Standing in front of their petrol pumps is Sam Adair with his wife at the 12th Milestone in Templepatrick.
The sign behind them says: Please ring for Attendant. 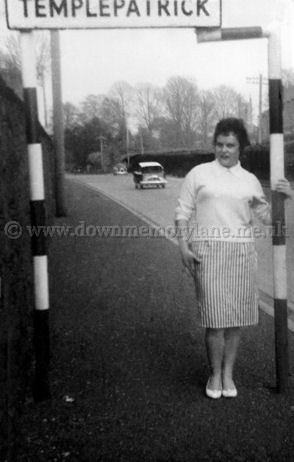 TEMPLEPATRICK 1727
Here we have Ann McQuillan in 1961 from Antrim at as you can see Templepatrick.
Perhaps Ann was waiting on a bus to Belfast while behind her heading in the same direction is a Ford Anglia.
Pages: 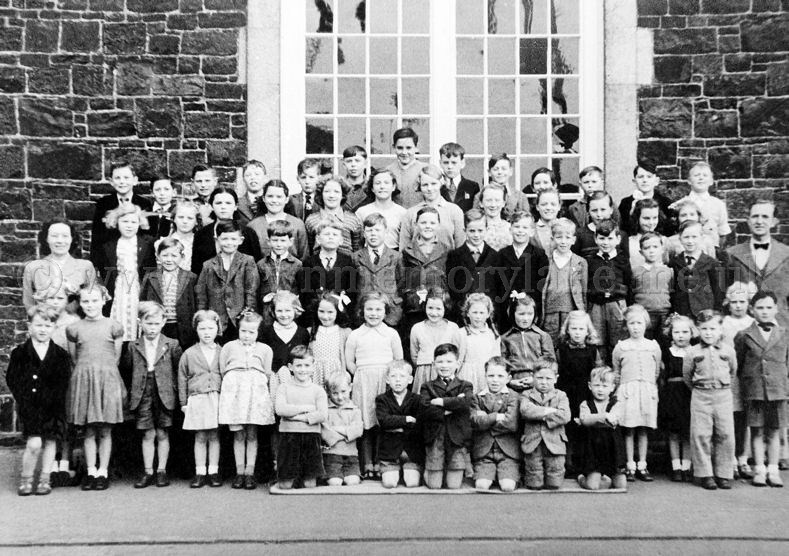 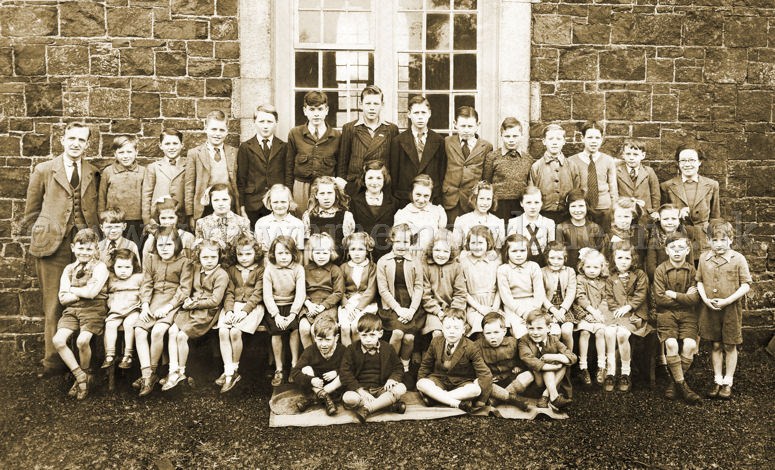 Now if you know any of the Unknowns please let me know so I can get all the names for all the children for the future. 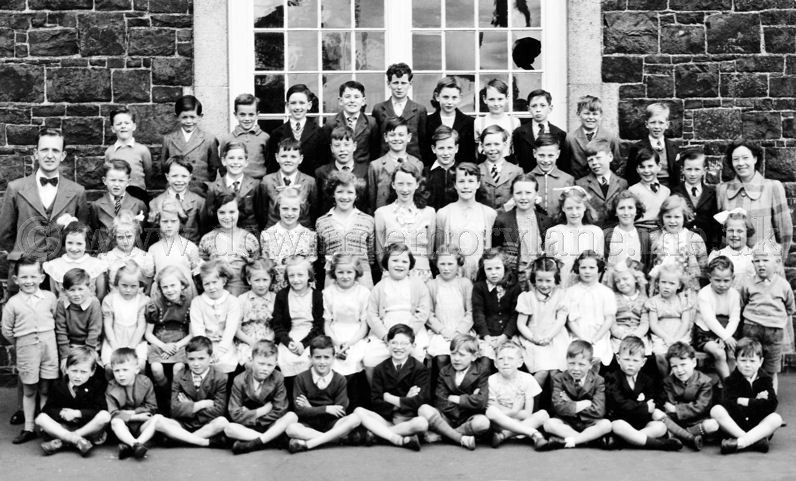 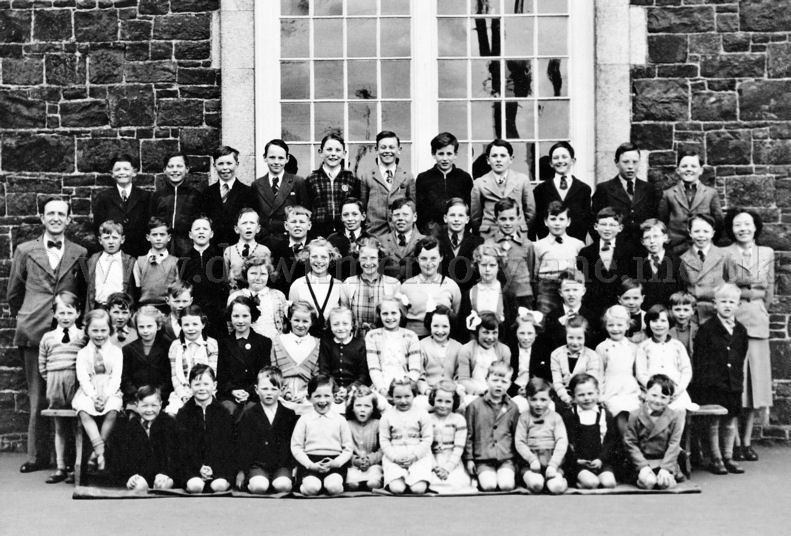 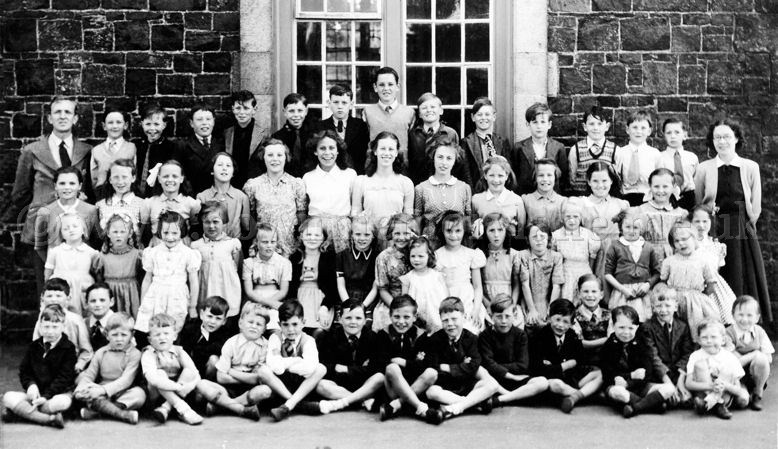 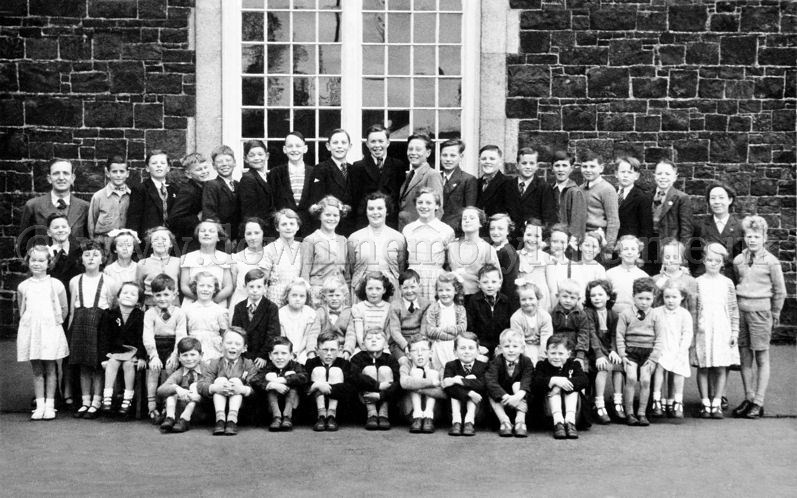 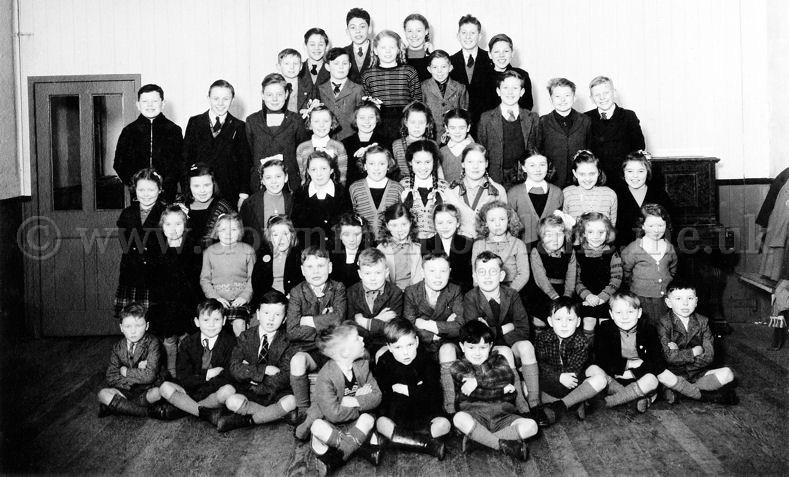 TEMPLEPATRICK No2 PRIMARY SCHOOL 2570
The pupils of Templepatrick School are having their school photograph taken indoors due to the cold and wet weather.
Now only one pupil is known and that is Richard Seymour seated in the front row with glasses on.
Sadly the rest are unknown and so is the year.

So want I want you all to do is to start digging into those memory banks and let me know who's who. 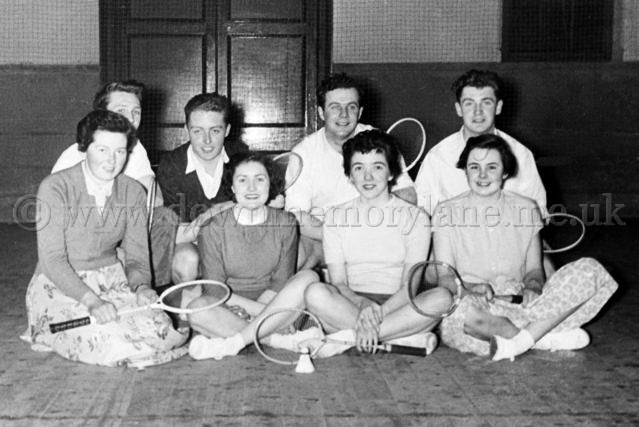 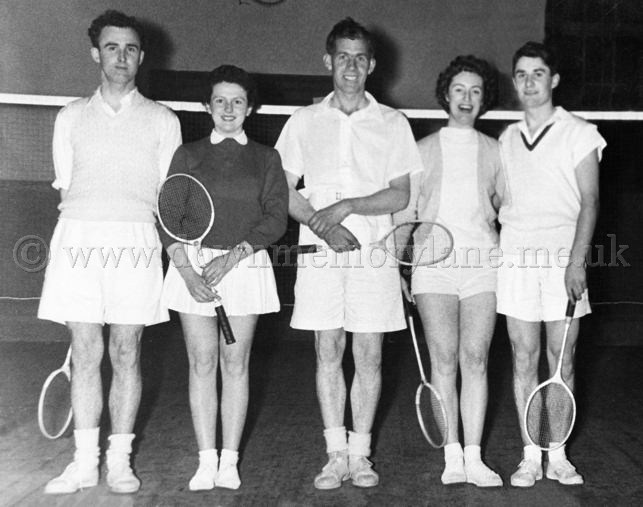 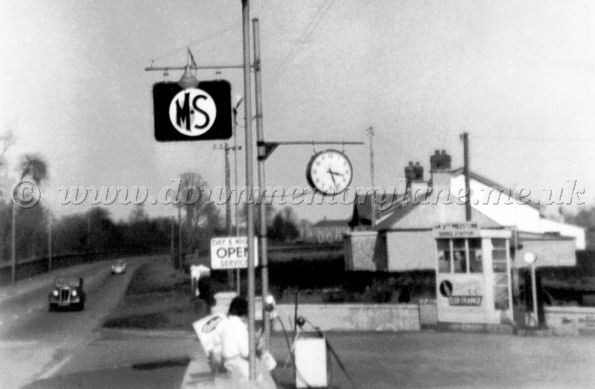 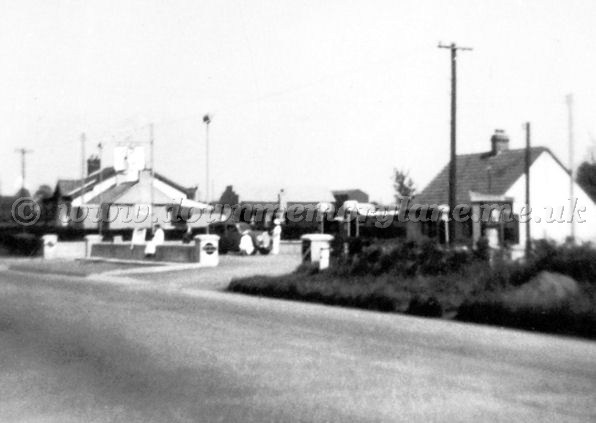 TWELFTH MILESTONE 3366
Here on the Belfast Road at Templepatrick is the Twelfth Milestone Garage and motorist were well looked after back then.
Here the garage attendants dressed in white overalls with peaked caps are checking the car's tyres and water before filling the car with petrol.
Over to the right what looks like a telephone box is the kiosk where you paid for your petrol. 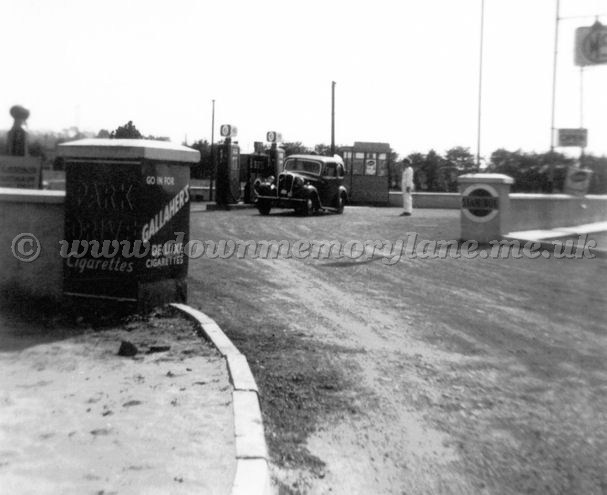 TWELFTH MILESTONE 3367
This is the Twelfth Milestone garage out at Templepatrick where you could get your Gallahers and Park Drive cigarettes along with your petrol.
Now this photograph has been posed for this is the entrance so the car is the wrong way, for you drove in got your car filled with petrol by the attendant in white overall and white peaked cap. Then drove over to the kiosk which you can see in between the car and the attendant to pay and get some cigarettes. 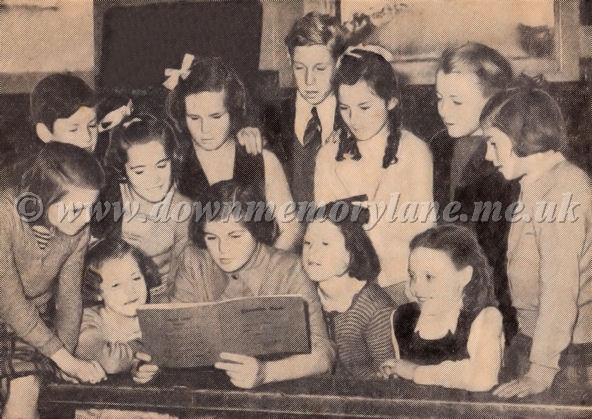 TEMPLEPATRICK No 1 PRIMARY SCHOOL 3394
Pictured here are some of the pupils of Templpatrick No 1 Primary School who at recent flower shows have won between them, 17 prizes for handwriting,
drawing, composition and knitting. In the photographMargaret Thompson aged 13 who had won six prizes for her handwriting shows an example of her work to other pupils in the school. From the left are Margaret Williamson, Ronald Fletcher, Beatrice Bingham, Kay Bingham, Elma Hanna, George Cooke,
Emily Wylie, Mary Taggart, Olga Boyd, Lillian McIntyre and finally Mary McIlwaine.
TEMPLEPATRICK RAILWAY STATION 3523
Once a thriving bustling platform full of people and cargo going everywhere Templepatrick Railway Station is now sadly deserted and alone. Just looking for someone to love it and turn it into a home. 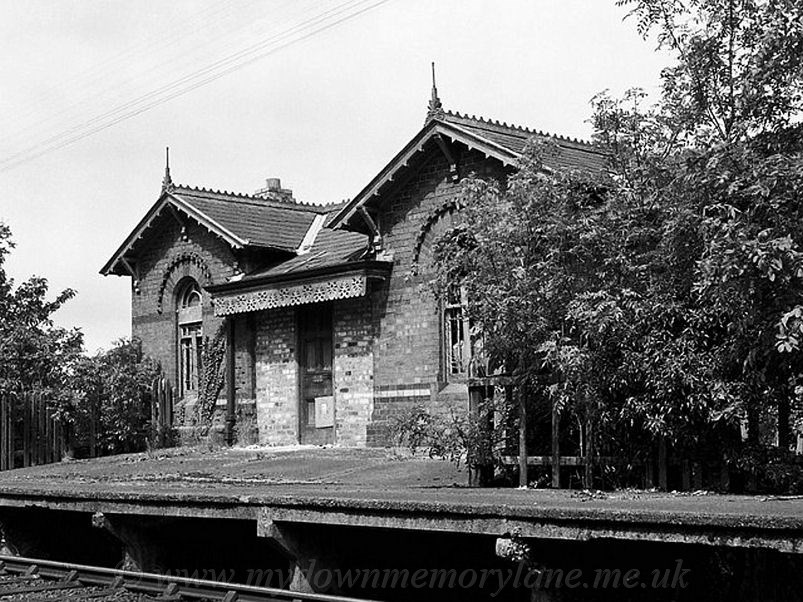