DUNDALK 3691
Here we are in Francis Street and here is called Roden Place in Dundalk in 1946. The monument is actually a memorial "Erected by voluntary contribution…also of the gallant services of the other volunteers of the rescue party, John Lamb, Patrick Galean, Thomas ….. who after a heroic struggle to….. Their ill-fated comrades reached shore in a state of exhaustion."; marble plaque to north face "In memory of Captain James Joseph Kelly, Gerald Hughes, James Crosby and James Murphy who lost their lives in a noble and humane effort to rescue the crew of the Baroue Mary Stoddard wrecked in Dundalk on the 9th April 1858".
Written on the back was: To Mrs T McCord, Ballyquillan, Aldergrove, Co. Antrim, N.Ireland. " Hello, Mr and Mrs McCord, well we are having a nice
time down here, and the weather is fair enough. Hope the girl is much better, will see you soon again, so cheerio. Flo and Billy. "
It was posted in Dun Dealgan at 6.15pm on the 14th Oct 1946. 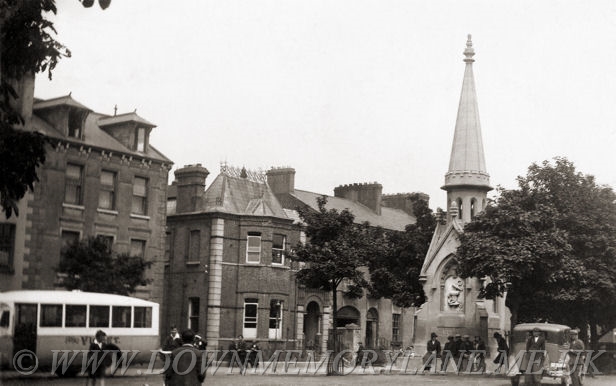