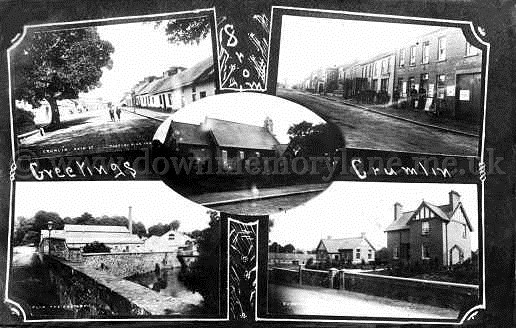 CRUMLIN 384
The photographs were all taken in 1913.
The card was Postmarked Bandbridge 9.45pm 1st December 1913.
To: Mrs Walker P.O. Crumlin, Co.Antrim.
Hope you received cards safely am sending balance in a few days
There is a little light got at the one of R.T.C. but will try and darken.
Fistardup 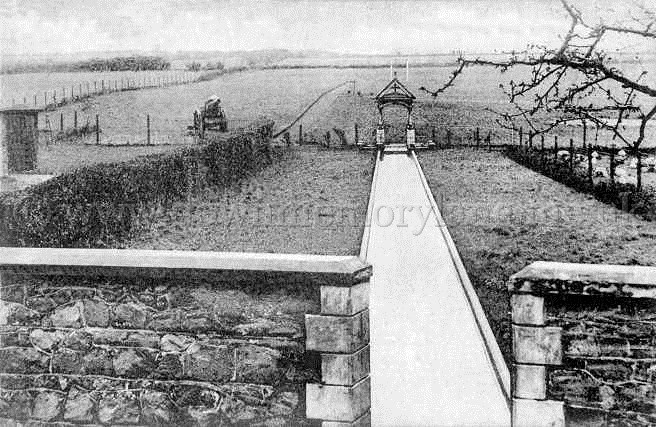 CRUMLIN PARK 370
The name of this park is unknown at the moment as well as the date.
It has to be after 1918 according to the field gun in the playing area. 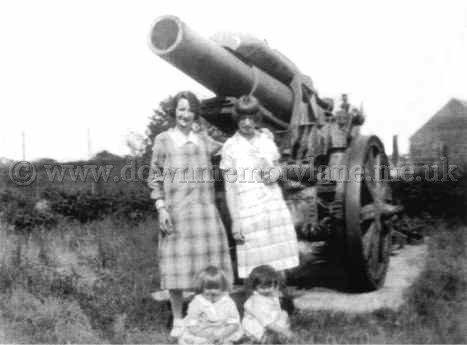 CRUMLIN WAR CANNON 526
This is Margaret and Elizabeth Deacon posing in front of an old war cannon in Crumlin Park which is now Crumlin Community Centre and playing fields.
I wonder are the two little children in front of them theirs?
The year is unknown. 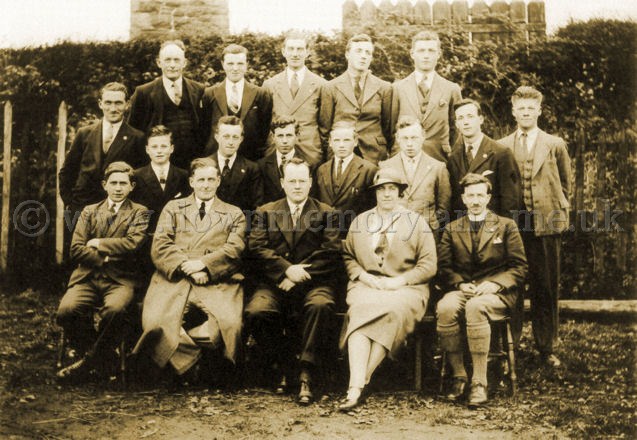 CRUMLIN W.A.C. SESSION 2273
At the bottom of the photograph it says Crumlin WAC Session 1931-1932.
Sadly all these people in the photograph are unknown, so please Crumlin folks get your thinking caps on and help me out. 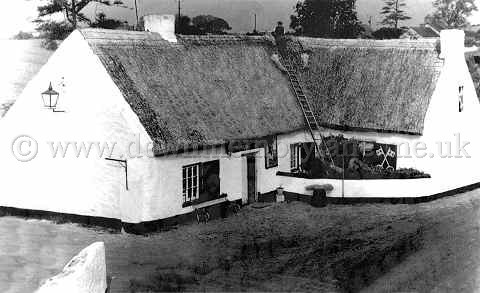 ULSTER WOOLEN MILL 2623
Here at Ulster Woolen Mill in Crumlin the door is open to let in some fresh air and here the workers are quickly having their photograph for prosperity.
1st in the back row is Thomas Prichard then John Murphy in the middle of the middle row and 3rd from the left at the front the young lad seems to holding a hank of raw wool. 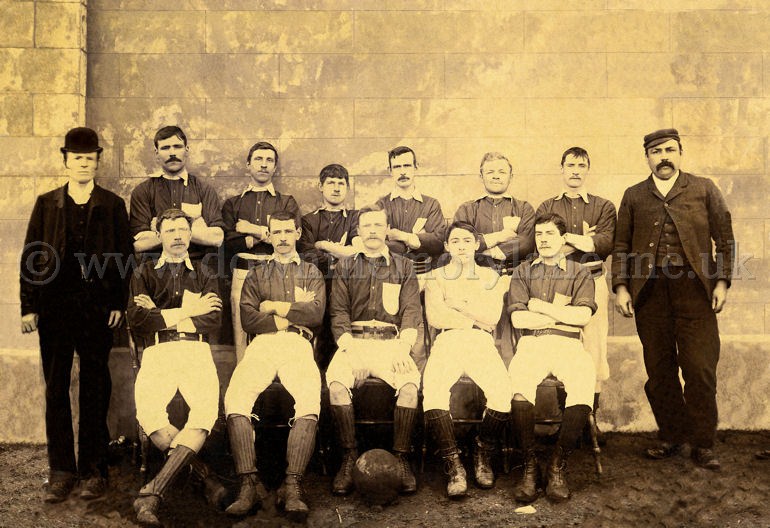 ULSTER WOOLEN MILL 2624
These are some of the workers of Ulster Woolen Mill in Crumlin, 2nd from the left in the back row is Thomas Prichard
John Murpy is standing 3rd from the left. If you know any of the others and the year, please let me know.

ULSTER WOOLEN MILL 2625
Here we are inside Ulster Woolen Mill in Crumlin with some of the workers getting their photograph taken.
All are unknown except for the man on the far right his name is John Murphy.
If you any of the rest and what the machinery behind them was for please get in touch. 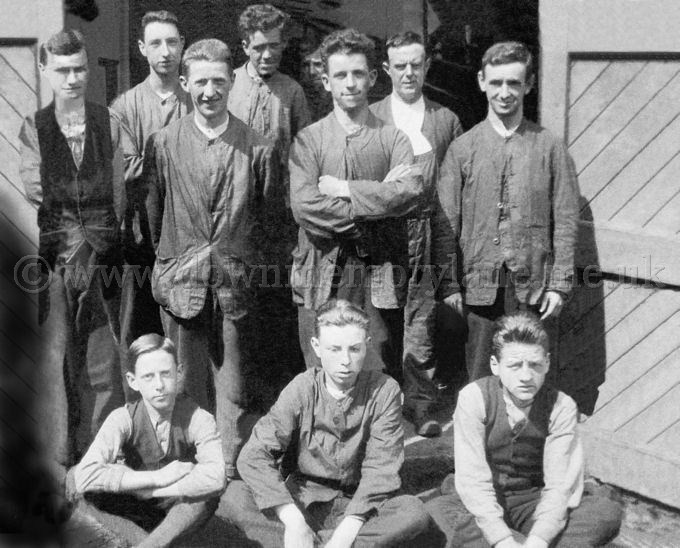 .
CRUMLIN COMMUNITY CENTRE 680
This is a Pre-School Playgroup enjoying the amenities in the Centre.
The child on the hobby horse is Sarah Christie the child on the floor is Kathryn Christie they both are in the Crumlin play group photo. The year is probably 1982.
My thanks to Margaret Christie for the above information on two of the girls. 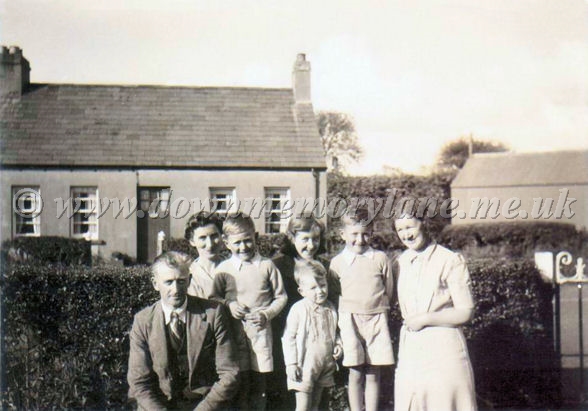 CROSSKEYS 562
This is an art form that you simply just don't see any more. Thatching a roof is a highly skilled job, but in the 19th century even the most humble homes often boasted a neatly trimmed thatch. Sadly practically all of them have long since vanished, but this lovely shot of a craftsman tending the roof of the Crosskeys Bar near Toome - one of the finest examples in the area - is a wonderful reminder of how things used to be. The year is unknown. 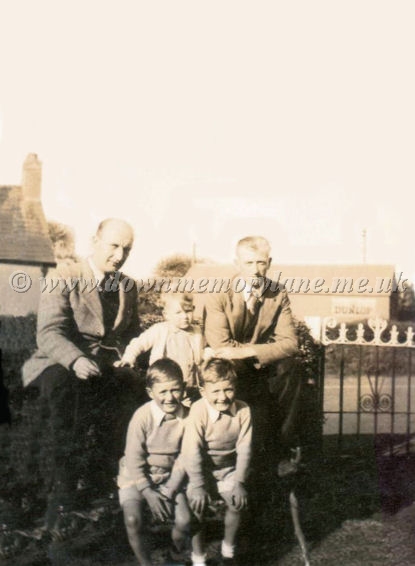 ULSTER WOOLEN MILL 2621
Here are some of the workers of Ulster Woolen Mill in Crumlin having their photograph taken during their 1/2 hour break.
At the back 2nd from the right is John Murphy and 3rd rom the right is Thomas Prichard and bottom right is Anthony Hamill, sadly the rest are unknown.
As you can see it was a hard life and a dirty job and the young lads in the front have got bags under their eyes. 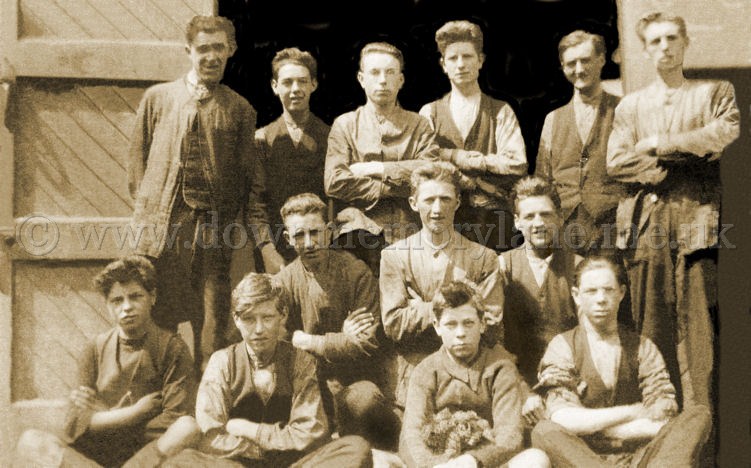 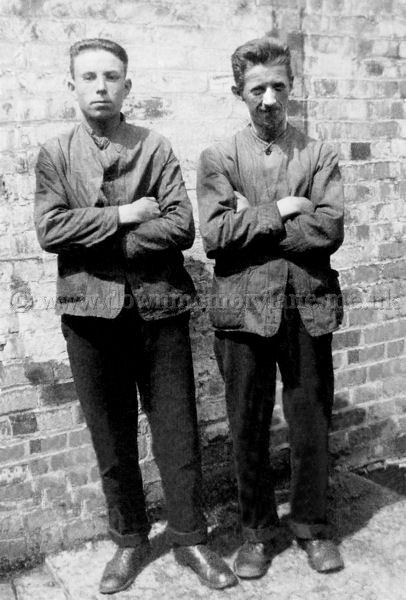 ULSTER WOOLEN MILL 2622
Here we have two workers outside Ulster Woolen Mill in Crumlin enjoying the sun, on the right is John Murphy with his young apprentice who is Unknown.
Index: 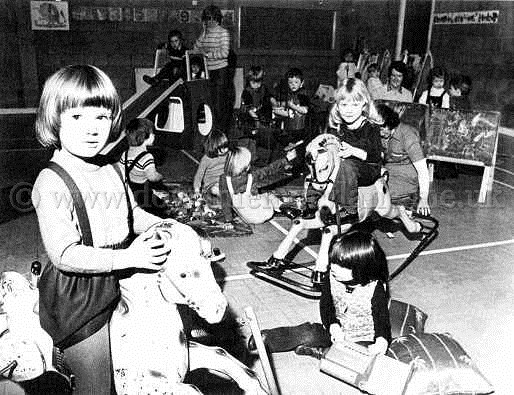 CRUMLIN INTERMEDIATE SCHOOL 1351
This is Crumlin Intermediate School's under 14 soccer team in 1964 -1965
Standing at the back we have Jim Beresford (Teacher), D. Nelson, H. Tipping, B. Minford, J. Curry, T. Doyle and J. Morris (Teacher).
Seated are D. Hanlon, K. Bain, M. Thompson, E. Marsden and I. Calvert.
On the ground are B. Coen and D. Mackay. 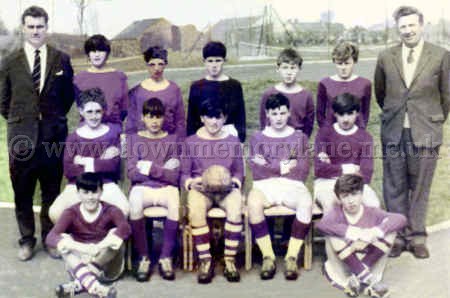 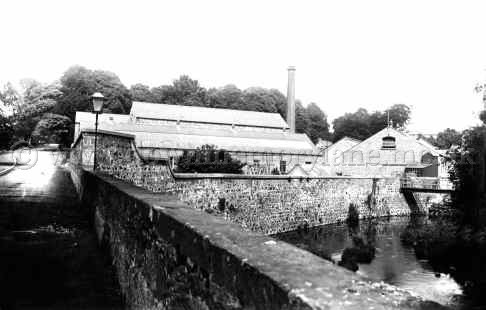 ULSTER WOOL MILL 374
This is the Ulster Wool Mill, it must be a Sunday for there is no one to be seen the year was 1910.
Postmarked Belfast 3.30pm 6th January 1911.
To: Mrs Walker Post Office, Crumlin.
Dear Mrs W. I hope you are A1 and how are J. and Mabs doing at school. I am kept very busy at school these days but having a nice time in the evqs. with Agg. Anything fresh in C. since I left
With love and kisses to J. and M. and yourself
Your S. Friend Blauclie.
CRUMLIN ROVERS FOOTBALL TEAM 2640
This is Crumlin Rovers Football team over 114 years ago back in 1896!
At the back on the left we have John Bawn, Willie Elliot, Arthur Christie, Eddie Johnston, Robert Leslie, John McGarry, Willie Murphy and Hugh Gettingby.
Seated are James Henry Bawn, Sam Leslie, Willie Bawn, Jim Heffron and finally Andy Connolly. 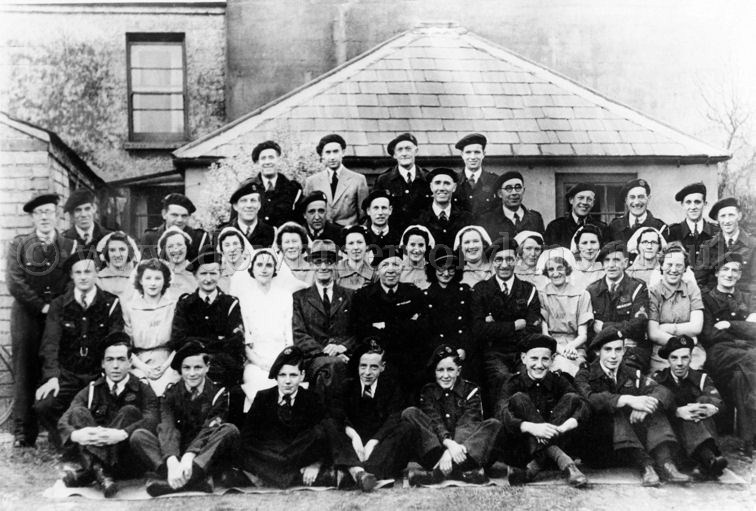 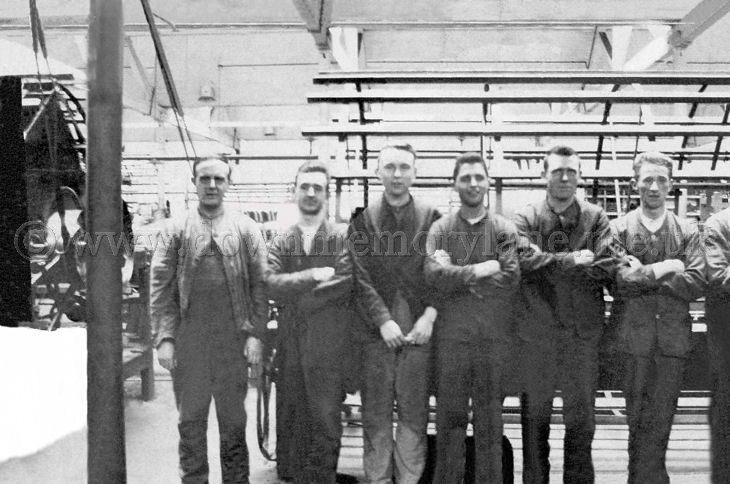 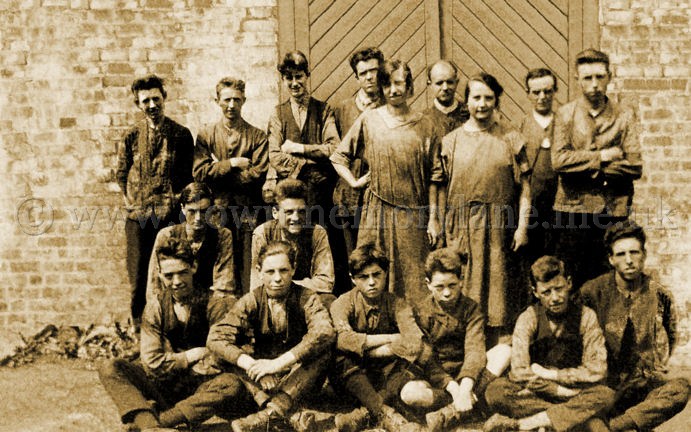 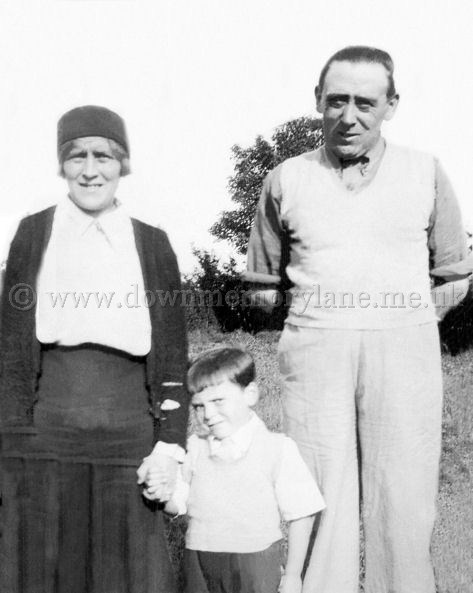 McCOLLUM FAMILY 2633
This is the McCollum family who stopped their daily chores to have this photograph taken.On the left mum Annie, dad Henry and their little son Joe. 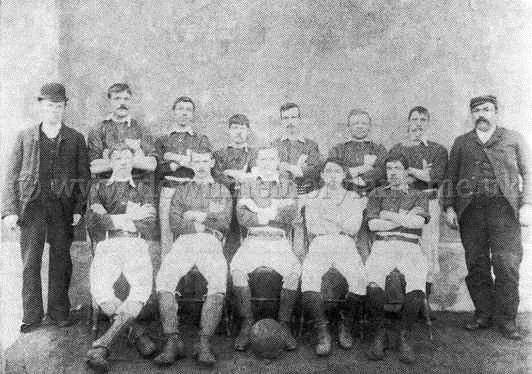 CRUMLIN ROVERS 2910
Time may have taken its toll on the picture of Crumlin Rovers - but then it was taken back in 1896! Crumlin may have been a small town in those days,
but they still fielded a top class squad. Included in the back row are John Brown, Willie Elliot, Arthur Christie, Eddie Johnston, Robert Leslie,
John McCorry, Willie Murphy & Hugh Gritingy. Seated at the front are James Henry Brown, 'Saw' Leslie, Willie Brown, Jim Heffron & Andy Connolly.
My thanks to Babs Learoyd for giving me the correct name of the mill.
ALEXANDER TERRACE 3311
In the front garden of their home in Crumlin, behind them to the left is the start of Alexander Terrace. The building behind them is Bob Mair's garage.
On the left is Fred Mc Dowell then Victor Campbell and his daddy Norman Campbell. In front are Fred's two sons (twins) on the left is Pete and Douglas.
CAMPBELL WEDDING 3632
This wedding was taken Crumlin and perhaps in Halon's photographic studio. On this such a joyous occasion is the is the Bride Annie Campbell(nee Prichard) and her husband Normam Campbell who are on the left and on the right are the best man and bridesmaid are Norman & May Rae.
ALEXANDER TERRACE 3312
It's 1947 and family and friends have gathered together to have their photograph taken here at Alexander Terrace in Crumlin by Fred McDowell.
In front is Norman Campbell, to his right is Victor Campbell, behind Norman is Isobel McDowell then her son Peter, Doris Campbell, Douglas McDowell and Annie Campbell. 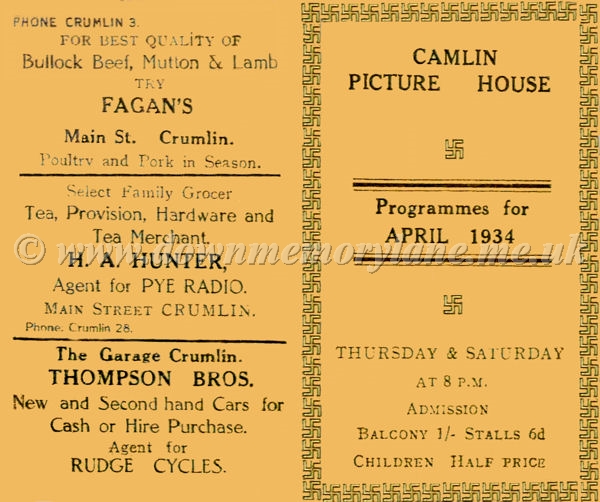 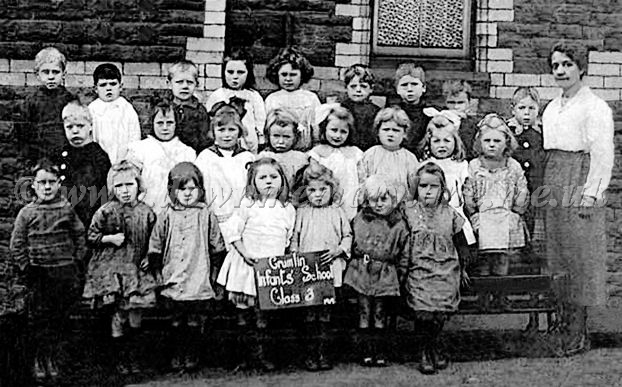 CRUMLIN INFANT SCHOOL 3448
It's that time of the year once again here for Class 3 at Crumlin Infant School back in 1917 which was in Crown Street.
More than likely it's the first time any of them have seen a big box on a tripod and worst of all being told to stay very still and so it shows on some of their faces. Take for instance the first boy on the left in the back row looks scared, the next boy does not know what to do while 4th along the girl is a bit dubious, while at the end of the row the boy face looks stiff with fear but from the waist down he is shaking that much that he is also moving the teacher from the waist down causing the lines to appear in the photograph and for her to look apprehensive. The first boy in the middle row does not like this not one bit, 4th along the same row is pouting, the next girl is not to sure while 2nd from the end looks like she is ready to burst into tears.
The only one who doesn't seem to care what is going on is the first boy in the front row with his hands in his pockets and a cheeky grin on his face, you can just imagine what he must have been like in class.
At the moment neither pupils or Teacher are known at the moment unless you know, if so please let me know.
CAMLIN PICTURE HOUSE 3421
This is Camlin Picture House Programmes card - Front & Back for April 1934 in Crumlin the picture house was owned by Jimmy Hanlon.
Now you might be wondering what on earth is the swastika is doing on the card. In the beginning of the twentieth century the swastika was widely used in Europe. It had numerous meanings, the most common being a symbol of good luck and auspiciousness, which is still used in various cultures today. 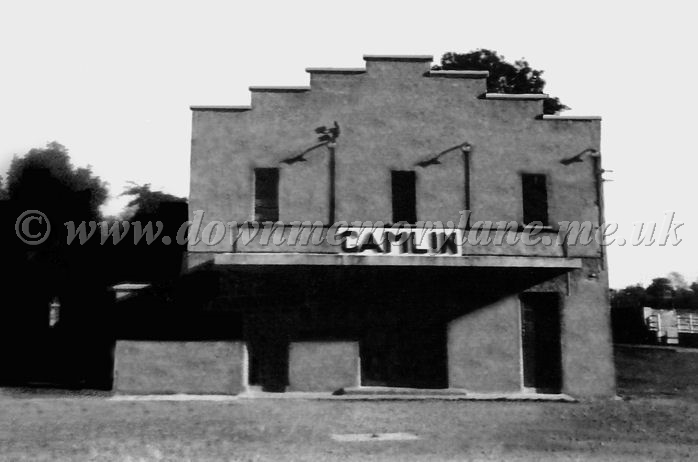 CAMLIN PICTURE HOUSE 3423
Here in Crumlin is the Camlin Picture House, the front was originally tin but rusted badly so it was replaced with breeze block and plastered.
In the photograph above the light on the left hand side is what looks like a man with film camera.
Also the step in the middle entrance you can see where it has worn down with the amount of people walking on it. 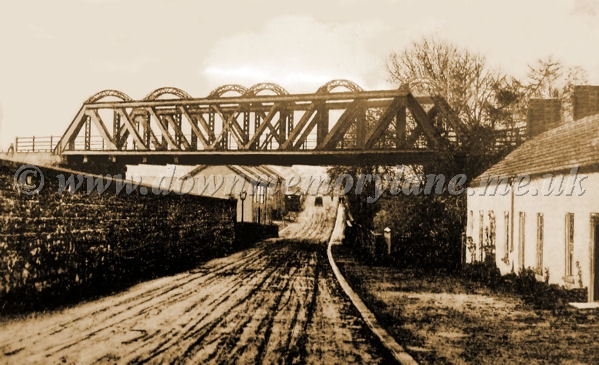 CRUMLIN VIADUCT 3424
This is Mill road in Crumlin in 1930 and spanning the road is the railway viaduct, carries the single-line railway track from Lisburn to Antrim. It crosses both the road and the Crumlin river and was built in 1915 by James Findlay and Co. Ltd. of Motherwell. In the distance is covered cart being pulled by a horse through this mire of a road, it would be quite a while before tarmac appeared but at least they have one solitary street lamp for the whole of the road. 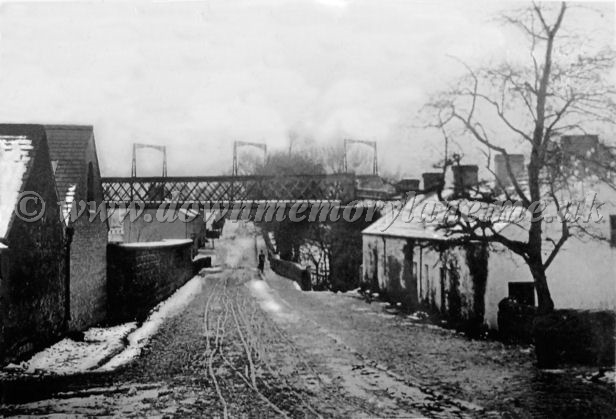 CRUMLIN VIADUCT 3425
It's winter time in Crumlin with snow on the ground and one solitary figure trudging through the lush on the pavement here on the Mill Road.
The tracks on the dirt road show no motor vehicles have been here only horse drawn carts. The photograph was taken before 1915 for the railway viaduct was taken down that year and replaced with a new one. Now this bridge didn't disappear like a famous one in Antrim it went to Windsor Park Football
ground and was used as a walkway over a street to the football grounds. 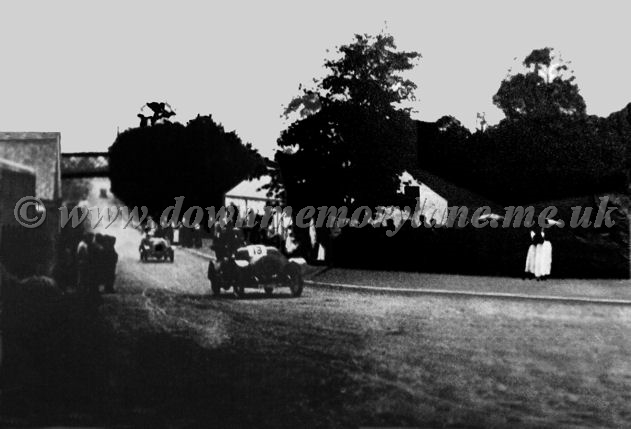 MOTOR RACING THROUGH CRUMLIN 3426
Here on the outskirts of Crumlin on the Mill road all the local people have gathered to watch the racing cars fly past them. The race was before 1915 for the railway viaduct was taken down that year and replaced with a new one, so many of these people would not have seen a motorized vehicle 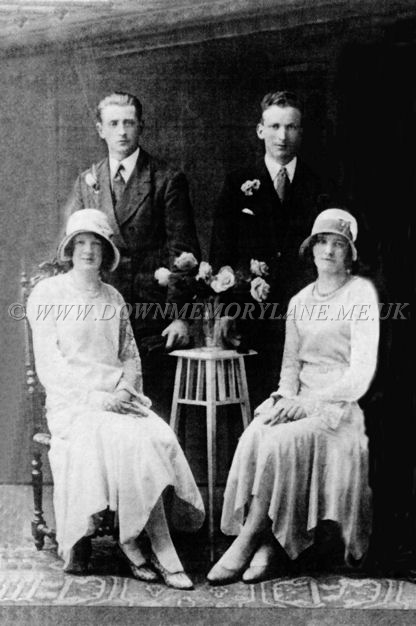 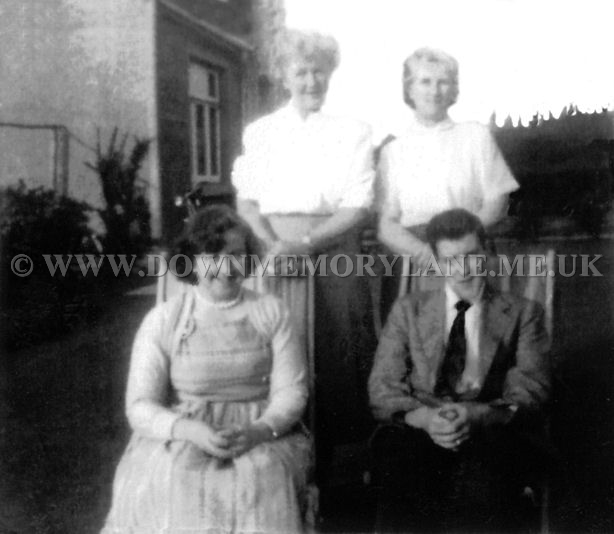